The USAT Liberty is directly situated near the beach on Bali's northeast coast - literally a short walk from the front door of Tulamben Wreck Divers.

The 120m long wreck rests on a 90 degree angle with the deck facing the open sea and used to be an American supply ship.

Anchored off the coast of Lombok, the ship was hit by a Japanese torpedo during World War II. Miraculously nobody got hurt, but the damage turned the ship into a non-functioning and useless hull. The American Navy's plan to tow the ship to Singaraja harbour (north Bali) failed as the harbour was completely occupied, so the ship was intentionally stranded on the rocky beach of Tulamben, where it was unloaded.

In 1963 Mount Agung (the volcano which towers over Tulamben) erupted and the magma flow pressed the ship back into the sea where it presently rests at a depth of 3 to 29 metres. Since then, coral has coated the wreckage turning it into a new home for an extraordinary number of fish, coral and invertebrates. bump-head parrotfish, napoleon wrasse and barracuda are regularly spotted around the wreck.

The wreck is an absolute underwater wonderland of marine life - schools of trevally, bream, fusilier and anthias mill all over and around the wreck - often following you during the dive. Batfish, large sweetlips, angelfish, butterfly fish and anemone fish (with resident anemones of course) hover under ledges and in crevices. Lionfish, scorpionfish, hawkfish, bumphead parrot fish, pufferfish and coral trout are everywhere - as are the gobies, blennies, shrimps and dottyback out on the sand flats.

The wreck is simply alive with life; corals, sponges and gorgonia fans are breathtaking along with the thousands of invertebrate life within them.

This is a world-class site and is not to be missed.

Click on the dive site map below
for a more detailed look at the wreck.
The wreck is easily accessible from the beach and is also an excellent snorkel site. 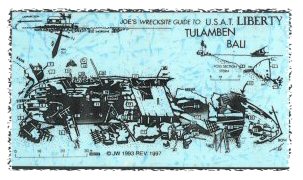 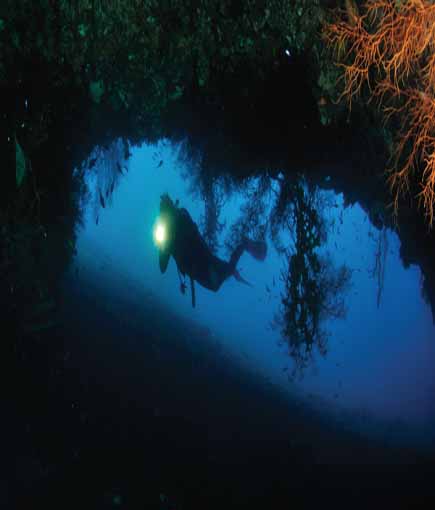